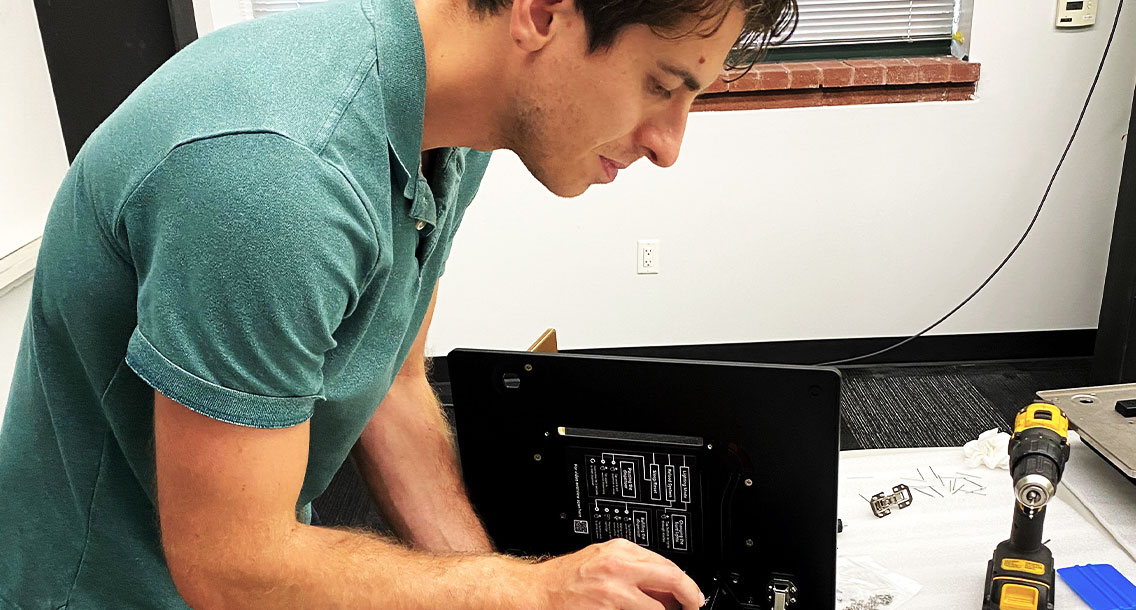 The who behind the world’s finest hand hygiene system

It all began with an idea after coronavirus was declared a pandemic in March 2020. Jon Olsen, like everyone else, was using sanitizers to keep his hands clean amid the uncertainty. Yet, what annoyed him were the ugly, plastic, boxy sanitizer dispenser designs that had begun to prop up everywhere. “Why couldn’t there be a dispenser that was aesthetically pleasing that also got the job done?” he asked himself. So, he took matters into his own hands (literally, by picking up his entryway table at home) and came up with a solution.

Olsen, who has degrees in agricultural and biological engineering and possesses a love for art and design, loves to tinker. Applying his engineering and design knowledge to a weekend DIY project in early 2020 led Olsen to create Vaask, the world’s most highly engineered and eye-catching hand hygiene system.

Starting out as a little squirt

Olsen grew up in a small town in Mississippi. Born with an imaginative intuition,  he has always been thinking up innovative ways to solve fun problems. For example, during his master’s program at Mississippi State University, he designed passively heated chicken houses to reduce fossil fuel use and came up with a low-cost data system to monitor soybeans during transportation in Brazil.

A year and a half into his PhD program at the University of Illinois at Urbana-Champaign, Olsen took a break to get some first-hand work experience. Enter, Big Ass Fans®.

Founded by Carey Smith in 1999 in Lexington, Kentucky, the company manufactured high-volume, low-speed fans for industrial and commercial spaces, in addition to the award-winning Haiku® ceiling fan for homes and public spaces. Olsen worked a graduate-level internship at the company in 2013, honing his skills in the research and development (R&D) department. He let his imagination run wild. He thought of problems, researched solutions, and tested hypotheses for issues out of the ordinary — like how the airflow from fans could prolong the shelf life for fruits and vegetables, reducing the staggering problem of food waste. He also experimented with predicting and preventing corrosion on metal surfaces; and even experimenting with sleep patterns to predict human behavior for a good night’s rest.

After eight months, his internship became a full-time job, and Olsen has never looked back. “Big Ass Fans’ interest in solving unusual and unique problems excited me,” Olsen recalls.

After Smith sold the company and moved to Austin, Texas, to become the founding contrarian at the very unconventional venture capital firm, Unorthodox Ventures, he knew he had to bring with him his pre-R&D department talents. Just like researching and developing unique fans back in Lexington, Smith knew he wanted to do something similar in-house in his new firm. He just needed the right idea. Olsen followed Smith, and moved with his wife, Rebekah, and infant daughter in tow. The family welcomed their second daughter in 2020.

When Smith founded Unorthodox Ventures, he sought to build a team that would offer everything investment firms lacked when they approached him almost daily at the fan and light maker. So much of venture capital simply focuses on providing money, but studies suggest 80 percent of VC-backed companies don’t pay off. Unorthodox Ventures aims to upend today’s parasitic venture capital industry, seeking out entrepreneurs with potential and ideas and providing them with much more than capital. The firm offers expertise in engineering, manufacturing, logistics, and marketing to founders and companies with unorthodox ideas [think medical-grade soft sponge for cleaning up after sex or introducing a modern bidet to a new market]. But at the heart of it all, the company functions on a simple thought, or as Olsen puts it, “we are product people who just happen to have money to invest.”

As the pandemic raged on, quality sanitizers were on backorder and dispensers got uglier with each display. As someone who helped innovate and design the Haiku ceiling fan, the terrible hand sanitizer experience during the pandemic really bothered Olsen. Dispensers were always empty, the formulations had harsh chemicals, and the lingering smells after use were absolutely terrible.

At a time when sanitizers were more important than ever, the experience everywhere was a failure at every level. Olsen’s weekend idea took shape in the form of an online shopping order. With a white ceramic bowl, a matte black foaming soap dispenser and his wooden entryway table, Olsen built Vaask’s initial prototype to show Smith his idea. (Today, the creation proudly stands near the office entrance of the venture capital firm, drawing attention from visitors entering the South Austin space.)

Suitably impressed with the plan to design and manufacture an aesthetically pleasing hand sanitizer dispenser, Unorthodox Ventures reviewed Olsen’s proposal, just like they would any other business opportunity, and took the decision to pursue the unorthodox idea.

A sanitizing piece of art

Olsen tinkered with designs over the summer to come up with a working prototype. “We were sure of the sink-and-faucet design concept,” but it took time to make it a reality. Olsen tinkered with over 15  combinations before finalizing Vaask’s signature, sleek all-metal construction with precise laser-guided technology to determine hand position, thus eliminating any inaccurate drips or mess. Then, he spent months gathering information and feedback from architects, designers, healthcare officials and teachers to refine the product. That is how Vaask’s adaptable design options and unique intuitive LED display came about.

Today, Vaask boasts these premium features, elevating it from any other dispenser in the world:

History has shown epidemics and pandemics heavily influenced architecture and design. From Le Corbusier to Bauhaus and thereafter, the world has moved on from dark rooms and heavy curtained windows to interiors boasting clean lines and natural bright light. Similarly, the coronavirus pandemic has taught us about the need for clean hands. A sanitizer dispenser is no longer an option but a necessity, and going forward, interior spaces need to be designed with this in mind.

Vaask, with its elegant design purposefully designed for modern spaces, quality construction and outstanding usability, has already won Olsen design awards. “Vaask is an exceptional example of how good design can transform an everyday product into an object that has both an aesthetic and an emotional impact on the user,” the Red Dot  jury (2021) wrote in honoring Olsen’s design.

Olsen’s focus is always working on Vaask but when he takes breaks, he starts tinkering around his home. He eventually wants to move on to his next innovative idea. His wife just hopes the brand new entryway table is left intact when inspiration strikes!